Fiona's Caravan is a stagecoach used by Fiona to travel with her goods and team to various locations. Pulled by Argyle and Preston, the carriage is first found in Eastern Plaguelands near the bridge from Western Plaguelands. After completing all quests for the group the carriage will always be found at Light's Hope Chapel from then on.

The location of the caravan can be seen on the in-screen map when in certain areas. This location is depicted by a miniature caravan, and when hovered over, displays Fiona's Caravan in a tool-tip.

Fiona's Caravan is later encountered in Shadowmoon Valley in the Warlords of Draenor expansion. After being attacked by botani, Fiona requires assistance in curing Gidwin of their poison and rescuing Rimblat Earthshatter, Argus Highbeacon and Talren Highbeacon. 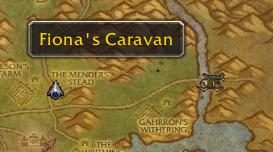 This carriage can be mounted.

The carriage is used to transport players and Fiona's people with amusing dialog between the towers of Eastern Plaguelands. Upon arrival that area will phase and allow for more quests provided by the group.

Each time the caravan reaches a new tower, a huge orb of what looks to be pure Light energy will shine just above the top of the tower. The orb is like a miniature sun, and can be seen from a great distance; if you can see the tower, you can see the Light. This likely makes a handy visual reference to new players to get their bearings in an unfamiliar zone.

[40] A Gift For Fiona, the caravan offers zone buffs that offers a nice bonus, depending on what you need a boost of. Every new NPC that joins the caravan gives a buff.

Other than a buff giving the indicated bonus, no other experience or reputation is provided on the repeatable buff.