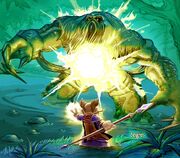 Fire Blast is a level 3 Fire mage spell that deals direct Fire damage. It is an instant cast spell, and key to a Fire mage's burst dps.

This spell sees a lot of use in PvP. Instant spells are impossible to interrupt, and spells and abilities that slow casting time have no effect. The only way to stop an instant is to silence the caster.

Instants can be cast on the move, as in kiting, or to chase or escape another player. Fire Blast must be cast while facing the target, but it is possible to jump, turn back to cast, then turn forward again before landing. The target only needs to be within the 180 degree arc in front of the caster.

[Hot Streak]; casting Fire Blast while the next

[Fireball] is casting will activate the "Hot Streak!" buff, and the casting Fireball still have a chance to proc Hot Streak. The instant