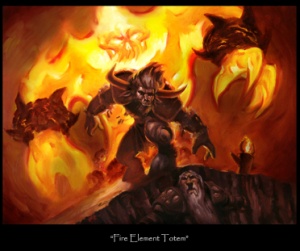 Fire Elemental Totem is a Shaman totem ability that summons a fire elemental to aid the caster.

Fire Elementals deal entirely fire based damage, and are themselves immune to fire. They have a mana bar which regenerates very slowly. They have two spells, a fire nova, that burns enemies in its radius for approximately 700 damage at 70, and a single-target Fire Blast. Because of their limited mana pool and poor regeneration, it should not be expected that the elemental cast either spell more than 4 times per summon. For the rest of its life, the elemental follows its target and punches them, dealing a varying amount of fire damage. The elemental also has a fiery aura, which burns nearby enemies for small amounts of damage every 2 seconds. Fire elementals are very fragile, and cannot survive attacks even from normal mobs. Much like

[Magma Totem], this totem is best used when all adds are dealt with.

The fire elemental is linked to its totem, and if the totem is killed, so is the elemental. Casting another

[Fire Totem] will also negate the fire elemental. Despite this limitation, the elemental has a long tether, and may cause trouble if it runs off to attack new targets, much like

[Searing Totem]. Elementals move surprisingly fast, and this can cause a moment of panic, but unlike other fire totems it is not aggro-linked to the shaman so if it runs off and attacks a new group it can be dismissed or left to die without pulling adds.

The Fire Elemental benefits from 55% of its master’s spell power.

The fire elemental can be used against Nethermancer Sepethrea in Mechanar, as it is a valid target for her fire elementals to chase and is immune to them.

An enhancement Shaman with

[Feral Spirit], Healing Spring Totem, Strength of Earth Totem, Windfury Totem and a Fire Elemental totem is one of the best group quests group in the game. The sheer damage output, and the mechanics of Feral Spirit usually bring down all but the toughest of outdoor enemies with relative ease.

The Fire Elemental Totem is great for hard burns on boss fights and can often put out a fair amount of extra damage. Because the totem itself is considered a Fire Totem,

[Fire Nova] can be used when the totem is up.

It is not known if either +spell power gear or Elemental passives that affect critical effects or fire totems benefit the elemental. Considering the fire elemental is not benefited by any party-wide abilities, and seems to be the "pet" of the totem, it is doubtful.