Not to be confused with phoenix or firehawk. 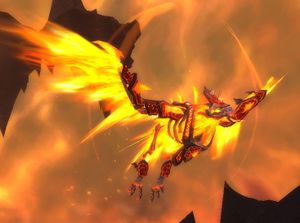 Alysrazor, queen of the fire hawks.

Legends state that the pureblood line may be traced back to the very creation of the Firelands.[2] Fire hawks are as wild as any of the creatures in the Plane of Fire, yet there is beauty in their form. While the storm crows struggle to fly in the high density air, the fire hawks on that ridge seem to soar with ease.[3] The fire hawks of Fireplume Peak can withstand incredible temperatures. While fire hawks are often found circling the skies above, they're also known to swim in molten lava.[4]

They are not birds. Certainly, they fly, their wings have appearance of feathers, and even called hawks, but that is where the comparisons to bird stops. In fact, it would appear they have more in common with dragons: an affinity with fire, a solitary nature, and some indications of intelligence.[5] However, they do differ from dragons when it comes to their lifespan. Whereas the dragons can live for millennia on end, these fire hawks live brief lives, passing quickly from egg to adulthood in 2 days after birth to death.[6] In the Fireplume Peak volcano the fire hawks make their home. The Fire Hawk Matriarch and her eggs can be found at the top. Fire hawk hatchlings imprint upon the first thing they see at birth, constantly pestering the target for food.[7] Altought fire hawks lay eggs, at least in the case of Alysrazor they can be created from dragons.[8]

Millagazor was a fire hawk loyal to Ragnaros. At this time it is unknown how many of Millagazor's eggs were corrupted.[11]