Fireball is a Fire mage ability, learned at level 10. It deals direct damage, and is one of the primary damage spells for Fire mages. 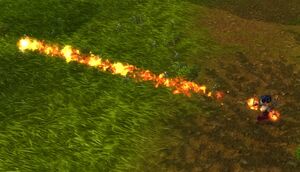 This spell was one of the Warlock's abilities in Warcraft: Orcs & Humans, before Mages started learning how to use a version of it in Warcraft II: Tides of Darkness:

The basic fire spell which all followers of the Orcish cults (the underworld) first learn. It channels the flames of Hades through the caster's body, allowing the wielder to direct it as a missile at anyone he chooses. It is a dangerous magik to employ, but the effects seem to delight even the lowest circle of Warlock to no end.[1]

Magiks involving the cardinal elements of the universe are favorites of the Mages. The Fireball is launched from the palms of the Mage and streaks like a comet blazing across the battlefield - slamming its fiery bulk into whatever stands in its path.[2]