For the companion pet, see 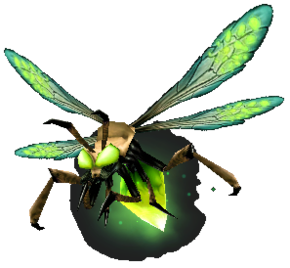 Fireflies are glowing, winged insect creatures found in Azeroth, Outland and draenor. Adventurers hunt them for their beautiful diaphanous wings.

Commonly used by sporelings as a light source as they navigate the waterways of Zangarmarsh, this luminescent insect helps them avoid the dangerous bogflare needlers.[1] Scholars have debated at length about how fireflies glow, but the leading hypothesis is "magic".[2] They feed on small leaves and grass,[3] but one species is known to consume purple flowers and nectar to retain a deep violet glow.[4]

Glowflies use their luminescent to attract mates,[5] while waterflies use the surface of water to reflect the light from their abdomen to attract their mates.[6] On very rare occasions glowflies synchronize their flashing creating a spectacular sight for any adventurer lucky enough to catch this phenomenon.[7] Some species native to the Jade Forest are attracted to the latent energy in shrines.[8]

Many fireflies (or creatures who share the same model) can also be captured in pet battles around the world:

Fireflies are classified as wasps and can be tamed by hunters.