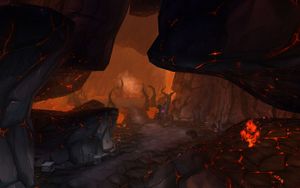 Firelands Forgeworks, also known as the Anvil of Flame, is a corridor within the Firelands and only accessible from the flamegate on Lightning Ledge in Mount Hyjal. It is here Forgemaster Pyrendius crafts weapons for the Twilight's Hammer. It is also here Cindermaul, the portal master, can be found. He holds the secret of constructing portals between realms.

The corridor is protected by Searing Guardians and Dark Iron Laborers.

Goldrinn has sent many followers into this area, none of which have returned. Among those followers is Jordan Olafson and Yargra Blackscar. They provide quests for the area.

Once the forgemaster is taken care of, Jordan will make sure the gateway is destroyed on their way out.