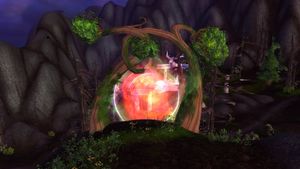 A portal to the Molten Front in the Firelands.

For the other quest chain added in Patch 4.2.0, see Elemental Bonds questline.

The Firelands Invasion is a charge led by Malfurion Stormrage and the Guardians of Hyjal to take the attack to Ragnaros in the Firelands. A new currency,

[Mark of the World Tree], is introduced. Marks are rewarded from completing daily quests and can be used to unlock the Molten Front, areas within it, and purchase high-level items at the following vendors: Zen'Vorka, Ayla Shadowstorm, Varlan Highbough and Damek Bloombeard.

Before adventurers can take the fight to Ragnaros, they must contend with his forces attacking Mount Hyjal. Both Ragnaros' forces and those of the Twilight's Hammer seek to burn Nordrassil, the world tree. It is up to adventurers to push the foot soldiers back and interact with five Ancients: Goldrinn, Aviana, Aessina, Tortolla and Cenarius, and rescue the legendary commander Jarod Shadowsong. Once these five Ancients are back in the fight, Malfurion, Hamuul Runetotem and Cenarius lead a charge against Ragnaros in Sulfuron Spire, driving him back to the Firelands.

[81] Aessina's Miracle), forces start gathering at the Sanctuary of Malorne in southern Hyjal. There, Malfurion attempts to open a portal to the Firelands. That attempt does not go well. The fight escalates to the point that Malorne is resurrected to help with the defense.

Adventurers are tasked with earning

[Mark of the World Tree] x20 in order to continue. This can be accomplished within one day by completing the initial quest line, ending with the resurrection of Malorne, plus one set of dailies that open up once the quest line ends. Once twenty Marks have been collected and remitted, the area transitions to the next phase.

[85] Guardians of Hyjal: Call of the Ancients &

Resources gathered, it is time to make a push into the breach. However, Hamuul has a side quest that goes disastrously wrong. Putting that aside for the moment, follow Malfurion through the portal on Nordune Ridge to cross into the Molten Front. Malfurion and his party are immediately set upon by an Obsidian Slaglord. Help kill it, then start securing the toehold. Malfurion shortly offers an opportunity to recruit the Druids of the Talon and/or the Shadow Wardens to the fight by handing either faction's leader

[Mark of the World Tree] x150. Players can earn a maximum of 12 or 14 marks per day (six from the quests starting at the Sanctuary of Malorne, and six or eight at Malfurion's Breach), so this will take roughly two weeks to complete.

Based on whether players choose to complete

[85] Druids of the Talon first, players will either make a push up to the Forlorn Spire to the northeast, or the Furnace to the northwest. Eleven marks are rewarded daily for completing the daily quest chain, in addition to the fourteen possible from phase one and phase two daily quests.

After recruiting one of the two sub-factions, the Sentinel Tree will grow larger.

Should players have both factions unlocked, they will be given the choice to complete either faction's quests each day, not both.

Druids of the Talon

A short side one-time questline (worth five marks) and one further daily (worth one mark each day) can be unlocked by killing a Druid of the Flame:

When you complete both

[85] The Shadow Wardens and

[85] Druids of the Talon, the phase at Malfurion's Breach advances slightly, with the Sentinel Tree growing significantly, and three NPCs appearing, each requiring

[Mark of the World Tree] x125 to unlock their wares:

Completing these final three unlock quests turns these NPCs into vendors who sell item level 365 gear for gold. Additionally, the Writs of Commendation sold by Zen'Vorka become available for purchase.

[85] Well Armed also becomes available if you have turned in 125 marks to Damek Bloombeard. That unlocks quest-giver Ricket who offers the player one of the following:

Since players may earn up to 27 Marks of the World Tree each day at this phase, it should take five days worth of marks per NPC to convert them from quest givers to vendors.

[85] Filling the Moonwell (the other two are not required), Malfurion offers the quest

[85] Into the Depths, in which you kill Leyara. When you complete

[85] Into the Depths, Theresa Barkskin sends you a thank-you letter containing gold. Completing the quest yields the

[Legacy of Leyara] achievement, which rewards the