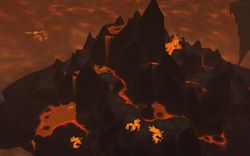 Fireplume Peak is a volcano in the northwestern most part of the Molten Front in the Firelands. It's here that fire hawks make their home. The Fire Hawk Matriarch and her eggs can be found at the top, while lava elementals roam around the base. If players are lucky, they can catch a glimpse of the diamond crab, Karkin, and the gemmed ocelot, Skarr, since they're often found on the pathway of floating rocks.

To get there players have to travel through the Furnace and jump between a path of floating rocks that will occasionally collapse and fall. At the final rock an air vent exists that provides players with enough thrust to jump to the island.