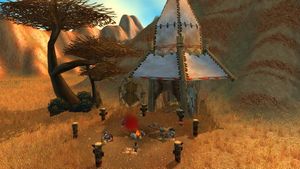 Shamans of the Earthen Ring gathered together around a campfire surrounded by totems at the Firestone Point.

Firestone Point is a little camp, used by the Earthen Ring, located west of Bael Modan in the Southern Barrens. The five shaman have gathered together at Firestone Point to watch over the land and tend to it's wounds. They are healing the broken earth. It has been difficult, since before there were raids attacking them at night. The orc Crawgol stationed at Desolation Hold was asked to provide any knowledge of the silithid he had, but when Tauna Skychaser read information from him she was disappointed from the truly unhelpful information.

Mankrik can be found south of the camp killing the quilboar in his hatred toward them. Mahka is able to convince Mankrik to rest at their camp with her.