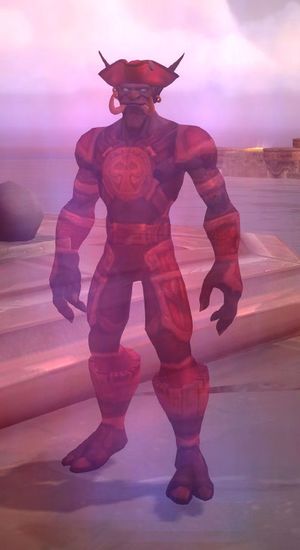 A vision of Jamboya as he appeared in life.

First Mate Jamboya is a member of Pirate-King Zem'lan's crew of skeletal pirates at the Port of Zem'lan in Vol'dun. He enlists adventurers to help him enact a mutiny against the tyrannical Zem'lan.

In life, First Mate Jamboya was a member of Pirate-King Zem'lan's crew of Zandalari pirates.[1] One day, the Port of Zem'lan was attacked by Faithless sethrak.[2] As Zem'lan did not have enough crews to win a fair fight, Jamboya searched for a potential advantage among the port's contraband caches, eventually discovering a set of dark, powerful idols.[3]

Jamboya witnessed how Zem'lan slaughtered a group of Zandalari refugees seeking safe passage on the Pirate-King's boats to escape the sethrak. The first mate could have stopped Zem'lan right there and prevented the crew's eventual fate, but instead he led them straight into it,[4] much to his immense guilt. When the sethrak army approached the port, Jamboya reported to Zem'lan, who ordered the first mate to rally the crew to defend the port with their lives. When it became clear that the Faithless were too many, Zem'lan told Jamboya to gather the cursed idols and round up the crew. Jamboya protested that there had to be some other way, but Zem'lan was adamant, stating that the sethrak would never take the pirates' home from them.[2] Zem'lan's crew traveled to the Golden Isle, where the Pirate-King used the idols in a ritual to kill Jamboya and curse him into an undead skeleton. Jamboya was the first that Zem'lan cursed and — as he regrets to this day — he did nothing to stop the captain from cursing the rest of the crew. This was the first of countless deaths of Jamboya's, each spent fighting and dying for Zem'lan and his treasure hoard.[5]

Years later, a Horde adventurer heads into Zem'lan to search for the vulpera scout Meeki on behalf of the treasure-seeking vulpera at Camp Lastwind. They find Meeki dead and Jamboya strung up on a nearby pillar,[6] having been tied up after his last escape. Jamboya offers the adventurer the opportunity to help obtain vengeance and treasure, but first he gives the hero a medallion to witness a vision of the day the port fell, to show that he himself is not without blame.[4] The adventurer agrees to cut Jamboya loose and help him mutiny against Zem'lan.[1] Jamboya sends the adventurer to rescue his fellow crew members Gunner Bosanya, Jukanga the Snitch, and Quartermaster Tulmac, who have all been similarly strung up around the port as punishment and who all agree to help in the first mate's mutiny.[7] He also sends the hero to witness two more visions of the day that the Port of Zem'lan was cursed.[2] After the crew members have been recruited, Jamboya asks the hero to retrieve the idols that Zem'lan used to curse the port[8] and burn the boats in the harbor,[9] after which the group travels south to the Golden Isle, where Zem'lan hoards all his treasure.[10]

Jamboya tasks the hero with stealing as much of Zem'lan's booty as they can[11] and accompanies them in an attempt to destroy the cursed idols atop the altar where Zem'lan conducted his ritual. However, instead of being destroyed, the altars simply release another memory of the past, this time of Jamboya's first death.[5] Jamboya and the hero proceed to challenge Pirate-King Zem'lan himself by ringing the gong at the top of the isle. After a battle, Zem'lan is finally killed. However, with his dying words he tells Jamboya that he will not remain dead for long.[12] Realizing the truth in the captain's words and that Zem'lan's minions will likely be looking for them on the seas, Jamboya, his crewmates, and the adventurer head back to shore and travel northeast with the treasure in hand to hide out with the adventurer's vulpera friends at Camp Lastwind. Jamboya tells the camp's leader Norah of their mutiny against Zem'lan, that they're looking for a new crew to join, and of the immense amounts of treasure that can be found off the coast of Zem'lan's port. Norah happily welcomes Jamboya and his pirates into the caravan,[13] and the first mate and his skeletons can thereafter be found sitting atop their pile of treasure in the camp.

Initial
We in dis together now, <name>.
Mutiny or de yard arm.

At the Golden Isle

Dis be what a life of eternal piracy gets ya. It be beautiful...

At Camp Lastwind
I owe ya everything, <name>. I won't be forgettin' dat.
For now, we'll help Norah and de other vulpera ransack all of Zem'lan's stolen booty. But don't hesitate to ask if ya need something from a few undead pirates.
We led a good mutiny, but I know dat Zem'lan didn't have to force all of de crew to be monsters. Many of dem did that on their own.
Be careful if ya had[sic] back into de port.

Ya be up for a bit o' seaside pillagin'? Zem'lan be orderin' his crews to de boats and dat makes 'em easy targets for us... if yoáur aim be true.

I seen ya in action before though, so I know ya can make quick work of those scurvy skeletons.

Hop in de boat when ya be ready to go.