Fish Frenzy is the quest that rewards the

Follow Nat Pagle to the Gloaming Reef, then dispatch all of the fish in the area.

You've got to see it! The fish, they're... they're everywhere!

Off the coast of Val'sharah, something's whipping them up into a frenzy.

I've got a boat down below. Grab your pole and I'll take you there!

What in the world have you brought me?! Nat told you to ask me to turn THIS into a pole?

<Marcia takes the severed lure from you. As she holds it close to the pearl, it begins to resonate with it.>

That's interesting. There seems to be a connection between this and the pearl. Maybe turning this into a fishing rod can yield some interesting results...

I'm ready. Take me to this fish frenzy of yours.

This will cause the player to enter a single-player scenario with Nat at the Gloaming Reef, off the shore of Val'sharah.

Nat Pagle says: This is the place. Unfortunately it's teeming with murlocs.
Nat Pagle says: If you can take out those murlocs, it'll be easy fishing for the rest of the day.

Kill every last murloc on the island.

Nat Pagle yells: You did it, <name>! Now let's fish up those frenzies!

[Gloaming Frenzy] by fishing in the pools and killing the Underlight Deepfeeders that semi-frequently spawn. 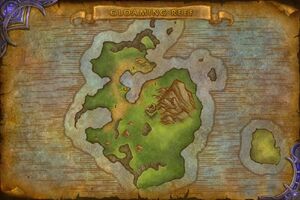 on the southwestern part of the island.

Nat Pagle says: As I was running around fishing up the frenzies, I noticed some bubbles over in this lagoon.
Nat Pagle says: I'm wondering if whatever's down there is what's been causing them to act up. Let's see if I can't rustle it up from where it's hiding.
Nat throws the barrel of fish into the water...

Nat Pagle says: Oh yea! There's definitely something down there. Let's fish it up, <name>.

Fish in the Roiling Whirlpool.

A Boat to Dalaran spawns - take it to return to Marcia in Dalaran.