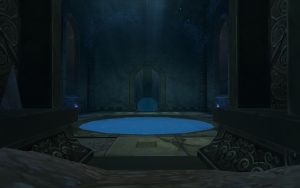 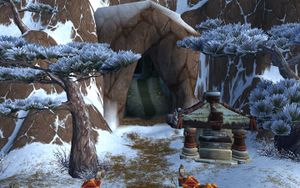 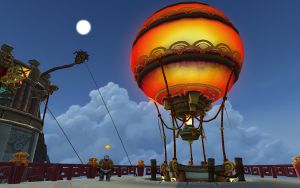 Speak with Mishi to travel to the Path of Conquerors. From there find Shin Whispercloud at Whispercloud Rise.

The villagers of Zouchin know the coast better than anyone in Kun-Lai. If the Zandalari are hiding on one of the islands, they will know.

Mishi will take you as far as Emperor's Path. I will go ahead to speak with the village elders.

The Zandalari are nearby, <name>. We must hurry!

The elders have agreed to help us figure out where the Zandalari have hidden the Thunder King's remains.

They have a few conditions, though...

Head upstairs and out. Immediately outside (and not at her previous location) is Mishi. Speak with her:

<Mishi looks at you inquisitively.>

She switches to full-size form and flies to the southeast, turning north before passing the Temple of the White Tiger and drops players off in a shallow circular pool.

The adventurer hops in the hot air balloon with Shomi, who narrates:
Shomi says: I hope you don't mind sharing the balloon with me. My father always told me not to talk to strangers, but you seem friendly.
Shomi says: Isn't Zouchin Province beautiful? I've lived here my whole life.
Shomi says: My father thinks it's too dangerous beyond Zouchin's walls for a lady. He only lets me leave when we need supplies from One Keg.
Shomi says: The way I see it is, I'm not very good at being a lady, so maybe I'd make a better adventurer like you.
Shomi says: Those ruins creep me out. They're so old...
Shomi says: Wait... what's that?! Where did all of those huts come from?!
Shomi says: Look at those boats! Where are they coming from?!
Shomi says: Oh no! Look at those huts! Why are they attacking defenseless villagers?
Shomi says: My village is under attack! I hope my family is alright.
Shomi says: It looks like my father was wrong. Even Zouchin can be dangerous!
Shomi says: I have to check on my family! Please help us!
She runs down the path from the hot air balloon landing south toward the village.

Follow her. Make sure to pick up the flight path! Cho is inside the inn, the North Wind Tavern, along with two of the village elders, Chi and Hou. They are having a heated conversation...

Five quests open up on completion, starting with