Fizzle and Pozzik's Speedbarge looks like a massive, city-sized ship and an artificial island located on the Shimmering Deep in Thousand Needles. Although the barge is named after its leaders, Fizzle Brassbolts and Pozzik, Jinky Twizzlefixxit and Razzeric separately believe that the ship should have been named after themselves: after all they built it.[1]

Lorewise, a ship leaves for Gadgetzan every day.[2] 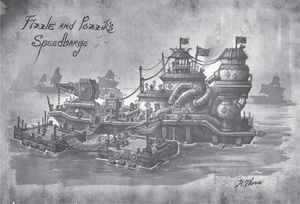 Fizzle and Pozzik's Speedbarge has its own set of docks on either side and a warren of buildings and machines built atop it, surrounded by more boats than even Stormwind Harbor.[3] The ship itself contains goblin and gnome architecture and has several barges roped to the main boat. The structures on the ship are very bizarre[1] and covered in thick, pulsating tubes.[2] Despite its massive engine, it seems to have no means of propulsion.

Races at the speedbarge are sponsored by the Mechanical Engineers' Guild of Azeroth, of which Pozzik and Fizzle are both members.[4]

Below deck, Daisy serves drinks in the Speedbarge Bar, where gnome and goblin patrons frequently engage in bar fights, with tension rising between the Horde-friendly goblins and the Gnomeregan-aligned gnomes. 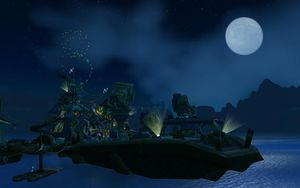 With the flooding of the Shimmering Flats and the loss of the Mirage Raceway during the Cataclysm, Fizzle Brassbolts and Pozzik moved their racing operations to this floating racetrack. The remnants of the raceway are located on the "lake bed" beneath the ship.

The barge itself is a major quest hub in Thousand Needles designed for both Horde and Alliance adventurers. It used to come under attack by a splinter group of Southsea Pirates led by the troll Admiral Tony Two-Tusk through cannonfire and blockades.

After the Cataclysm, however, even Tony Two-Tusk has begun partaking in the annual speed boat racing sponsored by MEGA.[5]

Perhaps it was the fact that they had already been working beside each other for so long that none of them is willing to cause bloodshed against each other despite joining factions at war with one another. Nevertheless, this is the only joint project between members of the Alliance and the Horde that is not overseen or enforced by a neutral third party, or with the two factions joining a third faction to work toward some overall greater good.[2]