Flamebender Ka'graz is a boss in Blackrock Foundry, and the second boss in the Black Forge wing. Ka'graz uses her shamanistic abilities to enhance countless weapons to be used by the Iron Horde.

Under the banner of the Iron Horde, Blackhand has enlisted Flamebender Ka'graz of the Burning Blade to imbue the Blackrock-forged armaments with the essence of flame. Along with her assistant Aknor Steelbringer, Ka'graz toils before an ever burning forge in support of the Iron Horde's conquest of Draenor.

Berserk
That's enough! You will burn... You will ALL burn!

Death
My flame... burned too bright.

Aknor obtained
You defeated her! You have proven yourself to me and saved me from a life of toil at the forge. I pledge my life to you <name>. 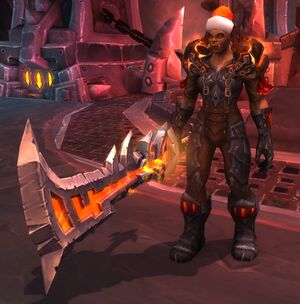