Flametongue Totem is a totem that increases spell power of party and raid members within 30 yards. It affects both damage and healing.

Flametongue Totem is a Fire totem, and thus cannot be used at the same time as another fire totem. Like all shaman totems it only has 5 hit points and is easily targeted and destroyed. When used in a raid group it will affect everyone in the raid who is in range.

It's effect is inferior to

[Totemic Wrath] and doesn't stack with it. Ergo, if you or another Elemental Shaman in your group have Totemic Wrath, there is no use in dropping this fire totem.

[Totemic Focus] reduces the casting cost of the totem by 25%.

[Earth Shield], have long durations and use the caster's spell power at the time of casting. By placing a Flametongue Totem before using such an ability, it effectively gains the bonus from the Flametongue Totem for the whole duration, while allowing the caster to move out of range or to use a different fire totem. This can be especially effective when used to boost Earth Shield before a fight in PvP. 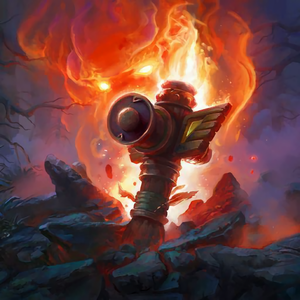 Although this is a "Blazing Elemental Totem" in the TCG, the artwork is used to represent a Searing Totem in Hearthstone.