For the dragonspawn race, see Flametongue (dragonspawn). For the new shaman ability, see 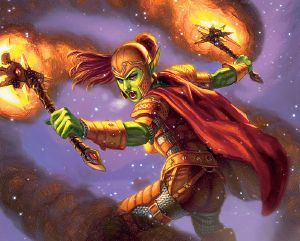 Flametongue Weapon in the TCG.

The flames licked the edges of the weapon as though only blood would slake its thirst.[1]

[Lava Lash], which increases damage by 40% if the off-hand weapon is enchanted with Flametongue Weapon.

Flametongue Weapon is the preferred weapon buff for Elemental Shamans.

[Unleash Elements] while Flametongue Weapon is active will result in the

[Unleash Flame] effect which deals Fire damage to target enemy and increases the damage dealt by the Shaman's next Fire spell by 30%.

Note this bonus damage refers to the additional melee Fire damage per hit, not the increased spell damage, which is a flat amount.