Few of these fiery harbingers remain following Ragnaros' defeat in the Firelands.[3] 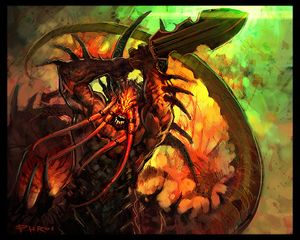 A flamewaker in the World of Warcraft Trading Card Game. 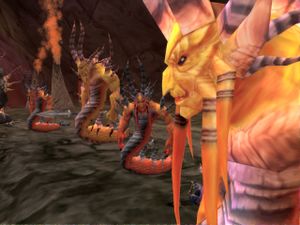 Flamewakers in the Molten Core.

[Mark of Flame] has a chance to drop from

Unlike the fire elementals, who are beings of pure flame, the flamewakers are elementals composed of flesh and blood.[4]

Flamewakers dwell mostly in the Firelands, but many followed Ragnaros when he was summoned into Azeroth during the War of the Three Hammers, and consequently took to dwelling in the Molten Core. Among the ranks of the flamewakers, overseers and their guards constantly jockeyed for a higher status in the elemental hierarchy in the hopes of winning the Firelord's favor.[4]

Flamewakers are ruthless servants of Ragnaros. Little is known about flamewakers. They are creatures not purely of fire.[5] They are fiery elementals, but their bodies are flesh and blood. A flamewaker has a humanoid torso with long muscular arms which rests on a serpentine body; the creature's elongated head has a distinctively demonic quality. Its body is mostly covered with yellow or red scales, though a broad strip of grayish scales runs from its chest down the front of its body. Thick spikes range from 1 to 3 feet long protrude from its shoulders, arms, and tail.[6] They are stated to be "outsiders, not humanoids".[7]

Most flamewakers dwell in the Firelands of the Elemental Plane, though some live in Azeroth's Blackrock Depths, including Ambassador Flamelash. A number of flamewakers live within Blackrock Mountain. Many of the bosses in Molten Core are Flamewakers, including Ragnaros' chief lieutenant Majordomo Executus. They are unwavering servants of Ragnaros the Firelord. They form a rigid society in the fiery regions of the Elemental Plane, ruled by a monarch who in turn answers only to Ragnaros. Some believe that flamewakers are immortal, but this is not the case. While they can live for one or two millennia, eventually their fiery bodies burn out and they expire.[8]

Flamewakers are highly intelligent, so they use sophisticated tactics and strategies. A group of flamewakers commonly spreads out to prevent area attacks from hitting too many. They try to divide their opponents, such as through the use of dominate monster or firestorm cast between opposing forces. Meanwhile, those flamewakers that engage in melee slowly retreat to draw away attackers, while other flamewakers wait to engage in flanking positions. A flamewaker generates so much heat that its mere touch deals additional fire damage. Flamewakers' metallic weapons (such as a flamewaker's quarterstaff) also conduct this heat.[6]

An adventuring flamewaker is an unknown sight; no flamewakers have ever left Ragnaros's dominion for other pursuits. However, Ragnaros may send flamewakers out from the Blackrock Depths for his own purposes. These flamewakers may appear to be adventurers, and such a flamewaker may join forces with an adventuring party if he thinks doing so furthers his task. A flamewaker who leaves the Firelands or the Blackrock Depths must remain near a source of heat (such as a volcano) or use magic to maintain its fiery temperature. Adventuring flamewakers usually wear specially crafted magic amulets to maintain their temperatures. Though it has never happened, the possibility exists that a flamewaker could forsake Ragnaros and his people and move out into Azeroth for a life of adventure. Such a life is probably short. Flamewakers have a demonic appearance and an evil reputation, so other races are likely to give them a cold reception. In addition, the outcast's flamewaker brethren and Ragnaros's other servants — such as Dark Iron dwarves and fire elementals would hunt him, with orders to destroy him on sight.[9]

All flamewakers take on the creature class of the same name, however, many branch off to become more, such as a warrior.[9]