Not to be confused with Tethyr or Ruins of Tethys.

Tethys initially is accompanied by an axebeak named Crackers, but Crackers leaves him for the Shadowblade.[2] He then is accompanied by a small hozen named Nanners, claiming that he can't be a successful pirate captain without a proper matey and that Nanners is more handy.[3]

After the formation of the Armies of Legionfall, he accompanied Tess Greymane / Lilian Voss to Dead Man's Bay to deal with the Blacksail Crew with which he already had a history. 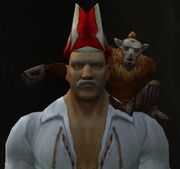 What can I do for ya?

What's with the hozen?
Ye can't find any loyalty in th' feathered folk. Crackers might've left me shipwrecked, but I can't be a successful pirate captain without a proper matey! Nanners is me new partner, and he's been right handy!
Who needs a bird, anyway? Nanners is a much more useful crewmate.