Fleet Master Seahorn is a tauren pirate of the Blackwater Raiders located on the top floor of the Salty Sailor Tavern in Booty Bay in the Cape of Stranglethorn.

He is in charge of knowing where all vessels of the Blackwater Raiders currently are located. He has a long-standing rivalry with Fleet Master Firallon of the Bloodsail Buccaneers. He learned the plans about attacking the port, but it was countered and some leaders of the Bloodsail Buccaneers killed by the orders of the Fleet Master. He also worked with Doctor Draxlegauge and Shakes O'Breen to find a treasury from Faldir's Cove.

After the Cataclysm, Booty Bay was attacked by hostile pirates of the Brashtide Crew and Seahorn helped to defend the port. He knew its member Bruce.

Some time afterwards, Seahorn presented Adashe Flintwill with Sea King and assigned the former Brashtide worgen, Joe Barker, to be the new captain's first mate. Several weeks later, the Sea King and the captured Killmonger would return to Booty Bay and Seahorn would learn about the deaths of the Flintwill brothers.[1]

Sent by his captain, he also appeared in Lunarfall Inn / Frostwall Tavern on alternate Draenor asking the commanders to look for a compass from orc tales. 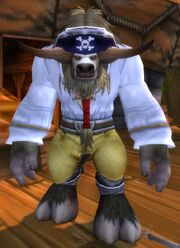 Garrison
Some fine grog you have here, commander.