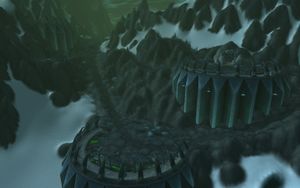 The Fleshwerks is a large facility of the Scourge which is dedicated to the creation of Abominations and Flesh Giants.

The Blackwatch is the quest hub of this area and Father Kamaros, who is captive in the area gives an independent escort quest. The quests here earn rep with both the Argent Crusade and Knights of the Ebon Blade. The quests involve the sabotage of the Lich King's Abomination and Flesh Giant factories.

The Fleshwerks consists of several different areas, a Flesh Giant lab, the Sanctum of Reanimation, an Abomination lab, a cauldron area and a summoning area. The player is first sent by Darkrider Arly to observe and dismantle the summoning altars in order to stop the flow of skeletal laborers. After the player has placed orbs to observe the movement, they are sent to destroy the Blood Orbs and Embalming Fluids. The quests initially seem to stop there, but if the player looted the

[Jagged Shard] they are instructed to gather more of these and give them to Crusader Olakin Sainrith. The Crusader has "never seen any metal like this in all of his battles against the scourge" and instructs the player to smelt the metal in the furnaces beneath Malykriss: The Vile Hold so they can identify the metal, as well as to capture more of the metal by killing the Runesmiths, in order to find out what the Scourge is doing with the metal. After this the player is sent on a preemptive strike to burn the corpses, as well as to take out the ghoul mastermind Doctor Sabnok. The last quest before the area is assaulted by Argent Crusade and Knights of the Ebon Blade forces involves killing chained Abominations.

After the phase change players are tasked to gather the remains of the slain Olakin and revive him. The final quest in the Fleshwerks involves killing Morbidus, the Fleshwerks' greatest accomplishment.

When the quests are completed, the area does not become a base, like the Shadow Vault, but remains in conflict with the Ebon blade and Argent Crusade.

The Scourge controls the area, skeletal laborers are being summoned constantly.

[80] Killing Two Scourge With One Skeleton starts a new phase in the Fleshwerks. Corpulent Horrors and geists populate the area, being attacked by crusaders and Ebon Knight cavalry. The summonings have also stopped.

Patchwerk may have been constructed here.