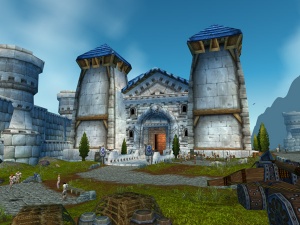 Foothold Citadel was an Alliance barracks within Theramore Isle. It was the headquarters of the Theramore Guard, and the location of some military personnel as well as several vendors. It was destroyed when the mana bomb destroyed Theramore.

The Horde hero Rexxar and his companions battled their way to Foothold Citadel, at the city's center, and slew Daelin Proudmoore on the steps of his city.[1] The squat keep houses the chambers of the Alliance Assembly. It also serves as a room for trials.[2]

Due to its name, the building might have been built as early as when the Human Expedition set foot on Kalimdor.