From Wowpedia
(Redirected from Footmen)
Jump to: navigation, search 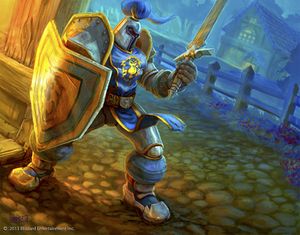 Footmen are warriors and versatile foot soldiers[1] who serve as basic infantry in armies of the human nations. Comprising the bulk of the Alliance army, the footman is the heart of the war machine for elves, humans and dwarves. Fighting in close formation, they use proven tactical methods: advance slowly with shields raised, then draw swords and close to melee range.

Footmen appeared as units on the human or Alliance side in Warcraft, Warcraft II and Warcraft III. They are the classic counterpart to grunts but despite their heavy armor they are weaker than them in Warcraft III (they do, however, cost much less). This may be explained by the fact that the footmen of the Third War are mostly volunteers lacking the plate armor and specialized training of their predecessors.[2]

Footmen were the backbone of the King's armies. They were foot soldiers trained in the art of melee combat using the sword and shield. Well armored for maximum defense against attacks, they could also deliver a solid blow with their double edged weapons.[3]

Footmen were the initial line of defense against the Horde. Arrayed in hardened steel armor, they courageously wielded broadsword and shield in hand-to-hand combat against their vile orcish foes. The valorous footmen were ever prepared to heed the call to arms.[4]

The vast ranks of the Alliance armies have been replenished since the devastating battles of the Second War. Trained in the arts of swordsmanship, the stoic footmen of the Alliance serve as Lordaeron's first line of defense. Armed with broadswords and heavy kite shields, footmen are capable of breaking any enemy charge.[5] Though these fierce warriors lacked the shining plate mail and specialized training of their noble predecessors, they still fought with bravery and honor on the field of battle.

The Human Footman chess piece in World of Warcraft. 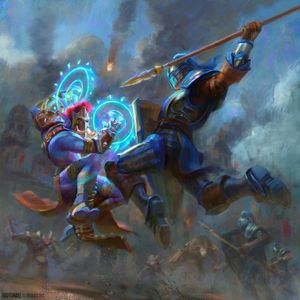 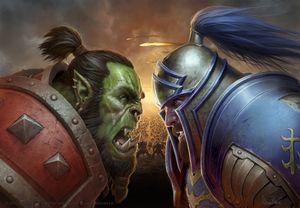 This grim, mud-slogging soldier initially appears to be a grizzled veteran, until you get a glimpse of his young face. His weapons and armor look worn, like they were scavenged from a battlefield.

Footmen like to travel in small groups and form ranks. They are attuned to formation fighting, and coordinate their attacks. They're capable of bringing down well-armored opponents.[9] 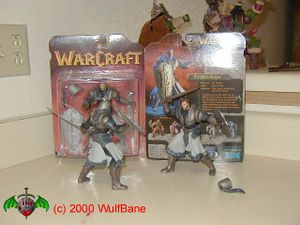 The "Human Footman" was also an action figure of the "Epic Action Figures, Collection I: Warcraft II", produced by Blizzard Entertainment.

Description on card back

Joined by the stoic Dwarves and the reclusive Elves, the Human denizens of Lordaeron prepare to wage war against a terrifying enemy. United in arms against a common foe, this new Alliance stands upon the shores of destiny and awaits the coming of the Orcish Horde.

Footmen serve as the initial line of defense for the lands of the Alliance and are the backbone of the King's armies. Clad in armor of hardened steel, they wield broadsword and shield in pitched hand-to-hand combat against the enemies of humanity.[10]

Stormwind, Kul Tiras, Stromgarde, Theramore, Lordaeron and the Sons of Lothar are depicted as having "classic" footman armor matching the color of their faction. Nethergarde, Hillsbrad and the Baradin's Wardens had footmen with different armors. Dalaran and Gilneas have their own infantry corps, respectively in the form of the Kirin Tor Guardians (of which the Violet Hold Guards may be a sub-division, as seen in the Nighthold) and Gilnean Royal Guards. It is unknown if Alterac had footmen, but the Syndicate Enforcers and Watchmen could have been remnants of them.