[Fight for the Alliance].

For the Alliance! is a meta PvP achievement earned for killing the leaders of the Horde located at each horde major cities.

After completing this achievement, the player will receive the

[Reins of the Black War Bear] in their mailbox.

If you are planning on raiding Horde cities during peak hours, you must have a full 40 man raid with mostly level 90's. Have at least five healers. Note that having a dedicated tank healer like a Holy Paladin is not necessary because the faction leaders they will be tanking do not hit hard. AoE healers are a better choice, because enemy players will be a much greater threat than Horde NPCs. It is also a good idea to have one or two backup tanks in your group, so that in the case that the main tank gets killed by enemy players, another can resume tanking the leader. As said before, no faction leader is exceptionally tough. You can burn them down while in PvP gear, which, if you have any, should be worn as it will help you more against the real challenge here: enemy players.

Warlocks are a great asset here, because aside from the fact that they are able to summon players who do not have the flight paths to your meeting place, their heavy DoTs ensure that faction leaders will continue taking damage even if your group's attention needs to shift to enemy players. Give priority to Warlocks who want to join your group.

Death to the Warchief! 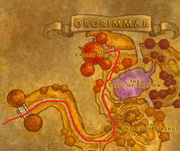 This is the fastest way to get to Garrosh.

All For the Alliance raids tend to begin with Orgrimmar. This is due to Orgrimmar being the most heavily populated Capital City. However, it is a bad idea to tell anyone where you are meeting or which city you are raiding first because if they are in fact an alt for a Horde player, they may alert the Horde to your group.

With the reforged lands due to Cataclysm, flight points near Orgrimmar are hard to come by. Ratchet is a bad idea for a meeting place, because being sighted by even a single Horde player can alert them to your presence, but you may have no other options. The Southern Barrens may be safer, but is still a Horde-heavy area, and can be hard to remain undetected. Theramore is unlikely to have any Horde presence, but is a long flight away. (Theramore will no longer be an option for the Alliance in Mists of Pandaria) In addition, the Mount Hyjal portal from the Eastern Earthshrine can offer a convenient path around to the front gate via Ashenvale. The decision of where to meet should be decided on soon after forming the raid. Where to meet will be up for the raiders to decide. Have a Warlock or use a

[Have Group, Will Travel] to summon people who do not have a flight path.

Have a rogue scout Orgrimmar and report whether Horde players are plentiful near the Valley of Strength and/or seem ready to defend Garrosh. In this case, someone in your group is the alt of a Horde player, or you were seen recruiting by a Horde player's alt. Get ready to fight. Otherwise...

With Orgrimmar being redesigned for Cataclysm, the quickest path to Garrosh is through the front gates of the city. Unfortunately, this is the portion of the city that is most likely to have enemy players present. Other entrances are present, if you wish to fly in, but beware of flying guards and other players. Like most faction leaders, Garrosh himself is not exceptionally strong; raids should be more worried about Horde players coming to defend him. If your server is Horde heavy, then it is best to wait until a battle for Tol Barad begins before attacking, because many Horde players who enjoy PvP will not be in Orgrimmar then to defend Garrosh. Once Garrosh is engaged, use all your DoTs on him, then spam AoEs.It might be a good idea to use some cooldowns if possible, because it is of the utmost importance to burn Garrosh's health. If the raid fails here it will probably fall apart, so use CDs if you can.

Once Garrosh is down, drop a

[Stormwind Banner] on his corpse if you feel like adding insult to injury, then RUN, as his respawn timer is, like Lor'themar Theron's, only 5-10 minutes!

If many Horde players showed up to defend Orgrimmar, they may be on your tail now. Thunder Bluff is obviously the next logical step, but do not go there if you barely managed to down Garrosh because of defending players. Throw them off by going to either Undercity or Silvermoon City next. Otherwise...

If it is safe to do so, then this is the fastest way to get to Cairne Bloodhoof.

If you skipped Thunder Bluff earlier to throw off defending Horde players, make your way to either Desolace or Stonetalon, and fly to Mulgore. Pre-Cataclysm, Thunder Bluff was hard to navigate, and easy for Horde players to defend. But with the advent of

Baine Bloodhoof is in a longhouse at the other side of the High Rise. Tank him in a corner of his house, otherwise, his main ability (dropping aggro and charging at random raid members and knocking them back) will cause him to eventually run out too far and reset. The tank will lose aggro no matter what, so have your finger on your taunt keybind and keep it ready. A Death Knight tank is preferred here because they have two taunts on seperate cooldowns, but any tanking class will do. So long as you prevent Baine from resetting, you will likely down him before significant resistance arrives, if any.

If you did not need to skip Thunder Bluff after Orgrimmar, then your final two destinations are on another continent. Now is the time to hearth and take a bio break. Once finished and ready to go again, the preferred meeting place is Chillwind Camp in the Western Plaguelands. If you do not have a Warlock, then the nearby Scarlet Monastery meeting stone can be used to summon those people. 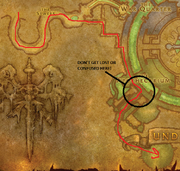 The fastest way to Sylvanas using the Sewer entrance.

The Sewer Entrance is preferred because it is closer to Sylvanas than the Main Entrance. The Sewers are to the West of the Undercity and the path to Sylvanas is shown on the Undercity attack plan here. I have noticed that many people who do not know the way tend to get lost in the Undercity the most. Mark one person who knows the way, and tell the raid to follow him/her.

Sylvanas is a relatively simple fight so long as you take care of her most annoying ability: Invisibility, which lasts for a long time, and an aggro drop when she reappears. Casting

[Faerie Fire] on her is enough to prevent this from happening for the entire fight. This is a useful macro for druids:

After patch 4.0.3a, however, Sylvanas now pulls with the entire room. This means two tanks are a must: One for Sylvanas herself and one for the 2-3 Battlemaster's, Envoys, and Guards that pull with her.

Have one druid enter at the same time as the Main Tank and use this macro on her to prevent this from happening. Other than this, it is a fairly simple tank and spank fight. The usual rules apply; enemy players are more important to kill than enemy NPCs. 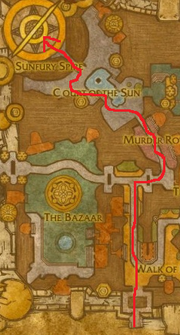 This is the way to Lor'themar Theron.

Zul'Aman is the closest flight path to Silvermoon for Alliance players, and Death Knights can shorten the time it takes for them to get there by using

[Death Gate]. Use the meeting stone to summon people who do not have the flight path. It is a common mistake for players who have not been to Silvermoon city before to think that the entrance to the city is further west than it is (ie. through the Dead Scar). Direct players to The Shepherd's Gate and have a leader who knows the way through the path shown here. From Zul'Aman, you have to use ground mounts as the game does NOT allow you to use flying mounts in the Ghostlands or the Eversong Woods.

Lor'themar ought to be tanked on the far side of the room, to avoid healers and ranged DPS being hit with his

[Mana Burn] spell. Lor'themar also has a Charm spell, which means that PvP trinkets and/or Every Man For Himself will need to be used. Rommath and Halduron provide extra obstacles for the raid, and each one should be tanked separately. Rommath will cast a

[Flamestrike] that will need to be moved out of, and Halduron will use Multi-shot. Remember, Lor'themar is the main objective here for the Achievement. It MUST be kept in mind that the Respawn timer's for Lor'themar, Rommath, and Halduron is, unlike most city leaders, only 5-10 minutes.

As with the other cities, Horde players are the most dangerous obstacle that can hurt the raid. While Silvermoon has a low population, the Orb of Translocation in the Undercity will lead Horde defenders right into the throne room. Keep an eye out for them, and work fast.

The most important part...

King Varian Wrynn has given you

[Reins of the Black War Bear]. It's in your mailbox. GLORY TO THE ALLIANCE!

The Letter From King Varian Wrynn

The bear is attached to a letter from King Varian Wrynn, entitled "For The Alliance!":

War rages throughout our lands. Only the bravest heroes dare challenge strike the Horde where it hurts them most. You are among such heroes.

The blows you have delivered to the leadership of the Horde will open the door for our final assault. The Horde will bow down to the might of the Alliance.

Your deeds will not go unrewarded. Ride on proudly!