Foreman Oslow is a level 20 quest giver located near the bridge in Lakeshire, in the human-aligned territory of Redridge Mountains.

He once had his tools being delivered from Goldshire on a wagon, but the orcs destroyed the Everstill Bridge and the tools were put on a boat to cross the lake to Lakeshire. Unfortunately, a catapult hit the boat and

[Oslow's Toolbox] sank to the bottom of the lake. Foreman Oslow was eager to retrieve them, and so enlisted the support of passing adventurers to return his missing tools. He also wanted to have the bridge repaired as quickly as possible, but was running low on supplies as one of his shipments of material was stolen by the gnolls.

Oslow has become trapped under a huge boulder, which had fallen just north of the bridge. Six bridge workers, Alex, Daniel, Dmitri, Jess, Matthew and Trent, attempt to remove the boulder, but are not successful. Players can save Oslow by finding a

[Dirt-Stained Scroll] from the gnolls. This allows the player to obtain an

[Ettin Control Orb], the reward from

[16] He Who Controls the Ettins. This gives players the power to control an ettin, and the quest

[16] Saving Foreman Oslow. Once completed, Foreman Oslow makes a super recovery and take his place on the dock. He subsequently offers the quest 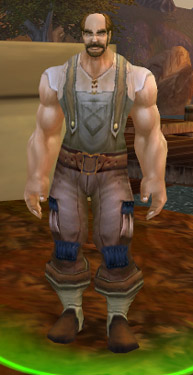