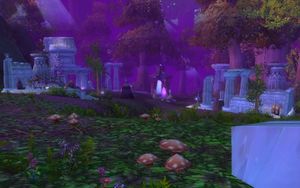 After the draenei arrived. 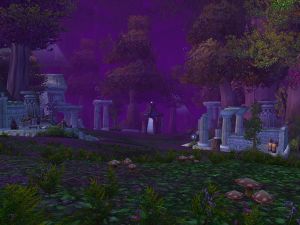 Before the draenei arrived.

Forest Song is located in northeastern Ashenvale, just northeast of Satyrnaar, north of the Warsong Lumber Camp, and southwest of Bough Shadow. It is an ancient Kaldorei ruin, formerly almost abandoned, where the usual forest sounds are still. Currently, Forest Song is inhabited by a band of night elves and draenei who are building an outpost there. The fortifications are being put up in order to help the Silverwing Sentinels defend the area from the Warsong clan and the Burning Legion forces in the area, and to attempt to reclaim some of the damaged areas, like Felfire Hill.

Sentinel Luciel Starwhisper, Sentinel Melyria Frostshadow, and Illiyana the dryad have all relocated to Forest Song in order to assist the draenei, and the construction efforts are led by Architect Nemos and Vindicator Vedaar. They are also working with Artificers.

The hippogryph flight master Suralais Farwind would also later set up a flight path for Forest Song. He assists in his own way, having taken the draenei female Auhula as his apprentice.

More recently, the Sentinels and Gnarl, the Ancient of War, have pushed into the Warsong Lumber Camp to assist with efforts there. With Raynewood Tower and Raynewood Retreat under attack by the Horde, Sentinel Melyria Frostshadow has departed to lend her strength to the Laughing Sisters.

Haldrissa Woodshaper suspected that the Horde attacked the outpost as a smoke came from its direction during the first assault of Ashenvale.[1]

Illiyana rallied her dryad sisters at Forest Song to attack the Horde's shredders.[2]