From Wowpedia
(Redirected from Forest Troll)
Jump to: navigation, search

Long before the rise and fall of the kingdoms of men, the Amani trolls of Lordaeron had built an enormous troll empire. After centuries of war and hate, an alliance of elves and humans finally dealt a crushing blow to the Amani when they defeated a great troll army at the foot of the Alterac Mountains. The empire did not recover from the defeat, and the trolls never rose as one nation again. Yet some forest trolls survived, each generation nurturing their hatred of the elves in the dark forests of the north for thousands of years. During the Second War, the Amani trolls were briefly allied to the Horde, and the forest troll Zul'jin was one of the greatest heroes the trolls have ever known.[2] 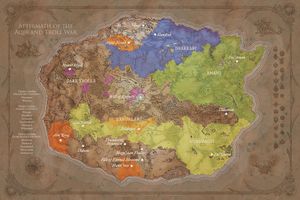 Forest trolls are native to northern Lordaeron. In the time before the rise of the night elves, the trolls ruled the vast Amani Empire. Together with the jungle troll's Gurubashi Empire, they fought the aqir, eventually disrupting the insectoid empire into two nations. 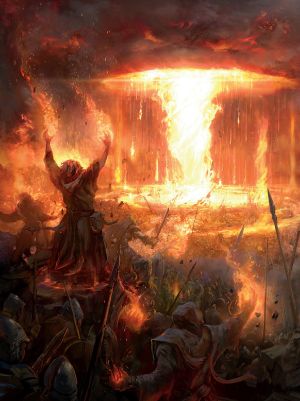 In the aftermath of Kalimdor's shattering, the forest trolls began to once again expand their lands across the newly formed Lordaeron, naming their new territory Zul'Aman. However, the arrival of the high elves lead to a burning rivalry that would last millennia. The high elves founded their new Kingdom on an ancient troll city that was sacred. This led to the forest trolls attacking the fledgling elven kingdom for the desecration of their city. The stubborn elves, by using magic, drove the trolls back and for a time no conflict arose between the elves and trolls.[3]

After two thousand years had passed the Amani warbands struck out of Zul'Aman determined to destroy the high elves once and for all. They scored victory after victory against the elves, pushing them slowly back. The desperate elves forged an alliance with the human empire of Arathor, teaching a hundred humans the way of magic. The combined human and elf armies met the trolls at the base of the Alterac Mountains. For days the trolls assaulted the allies' lines until at the right moment when the human and elven magi unleashed a fury of fiery magic onto the forest troll army. The searing flames stopped the troll's wounds from regenerating and then the human knights charged, slaughtering most of the troll army and driving them back into Zul'Aman. The trolls suffered a defeat from which they would never recover.[4] 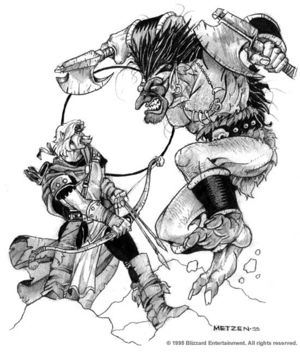 The forest trolls contributed their axethrowers, berserkers, and destroyer ships to the forces of the Horde fighting with the Orcs throughout the Hinterlands and Quel'Thalas, slaughtered thousands of humans and elves and razed to the ground all villages they found in their way. Orgrim Doomhammer and Zul'jin attacked the elf homeland and made it to Eversong Woods until Alliance reinforcements could arrive. Doomhammer, however, focused his strength on Lordaeron and did not destroy Quel'Thalas as Zul'jin wanted. When defeat for the orcs seemed inevitable, the forest trolls as a united race abandoned the Horde as suddenly as they joined, but some tribes decided to stay with their orcish allies, notably by being brought to Draenor by Kilrogg Deadeye and then spread among the various clans of the Horde of Draenor,[8] or joining up with Rend Blackhand's Dark Horde at Blackrock Spire. 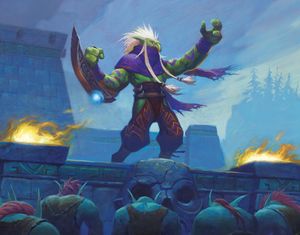 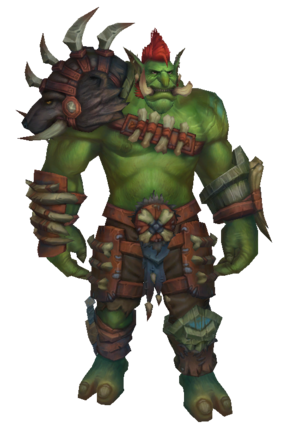 Forest trolls are noted to be taller and more muscular on average than jungle and sand trolls, yet noticeably smaller than the Zandalari and ice trolls.[11][12][13]

Like other trolls, forest trolls have long beak-like noses and pointed chins. They have tusks, typically coming from their lower lip, these tusks can vary between a foot long and barely visible. Forest trolls are fairly strong but are also extremely agile. The third toe on their feet helps forest trolls to maintain balance and climb trees.

Due to a mutation that took place many millennia ago, the forest trolls' bodies can support plant life to a limited extent, considered by some to be a strong affinity for plant life. A thin layer of moss inevitably grows on the skin of forest trolls shortly after they are born and gives them their characteristic green coloring.[14][15] Their bodies could also support other simple forms of vegetation, such as algae.[16]

Blackhand compared forest trolls to ogres when he first saw them. After finding out that they were agile, cunning and smart, he eventually concluded that the trolls were more similar to orcs despite their size and strength, which still remained more akin to that of an ogre.[17] As such, forest trolls are more agile, taller and stronger than orcs, as noted by Blackhand himself.

Some forest trolls have long, taloned fingers that are perfect for digging through rock and earth.[18] 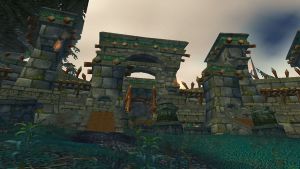 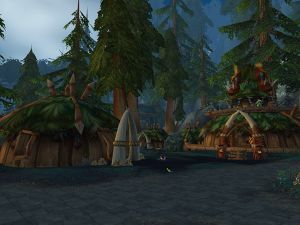 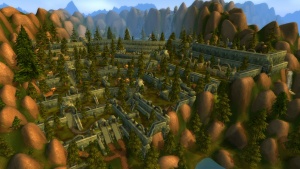 Forest troll culture is tribal and as primitive as their dark troll cousins. Though not as violent as dark trolls, forest trolls nonetheless have a fearsome reputation in battle.[19]

The trolls aren't so fond of elves. The forest trolls of northern Azeroth, led by the mighty Zul'jin, spent much of their lives staging hit-and-run attacks on the high elves of Quel'Thalas. Once, these trolls might have assaulted the elves directly, but the combined power of the human and elf nations whittled the forest trolls down to a mere fraction of their former strength and power.[20]

Forest trolls resemble their jungle troll cousins but are taller and more muscled. Though in comparison to orcs, Forest Trolls are noted to be more lithe and agile. Their hair ranges from blood red to midnight black, while their skins are a deep olive green. Forest trolls decorate their bodies with ritual scarring and piercings, and they prefer white or dark warpaints symbolizing their power and glory.[21] These humanoids are easily seven feet tall, with an impressive build and mottled, dark green skin covered with moss. Yellow teeth show under a large, hooked nose.[19]