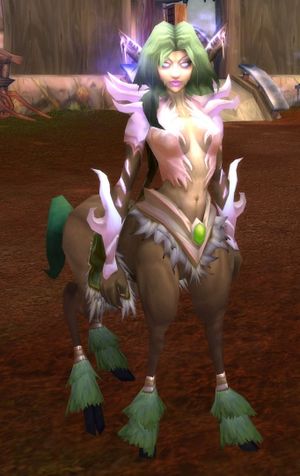 A forest nymph in World of Warcraft.

Forest nymphs are a race that have apparently evolved from dryads[1] and found in warm environments, usually in forests.

The term nymph is interchangeable with dryad. Nymphs are a wilder variation.[2]

A few forest nymphs have joined the Alliance, where they work alongside the night elves.

4,500 years prior to the First War, shockingly vicious and bloody battles erupted between the normally peaceful forest nymphs and taunka of Northrend. When word reached the night elf druids of the Cenarion Circle, the elves conducted an expedition to find the cause of the brutal conflict. To their immense horror, they discovered that the roots of the World Tree Andrassil had reached so far into the ground that they had come into contact with the prison of the Old God Yogg-Saron. The malevolent being's energies had spread through the tree, slowly driving all lifeforms in the area to madness. As a result, the Cenarion Circle were forced to fell Andrassil, killing it in order to stop its suffering. Forever after, it would be known as "Vordrassil", or "Broken Crown".[3]