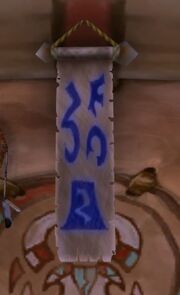 Forestlord and the First Druids is a part of tauren mythology. It is recorded in-game in a scroll hanging behind Hamuul Runetotem in the Arch Druid's tent on Elder Rise, Thunder Bluff. It is evidence of the druidic heritage that the Tauren race lost and is recently trying to regain.

In time, the child, Cenarius, grew to the stature of his proud father. A brother to both the trees and the stars, the great hunter roamed the far places of the world, singing the harmonious songs of the dawning. All creatures bowed before his grace and beauty - there were none so cunning as the son of the moon and the white stag.

Eventually, Cenarius befriended the Shu'halo and spoke to them of the turning world. The children of the earth knew him as brother and swore to help him care for the fields of life and the favored creatures of their great Earthmother.

Cenarius taught the children of the earth to speak to the trees and plants. The Shu'halo became druids and worked great deeds of magic to nurse the land to health. For many generation the Shu'halo hunted with Cenarius and kept the world safe from the shadows that stirred beneath it.