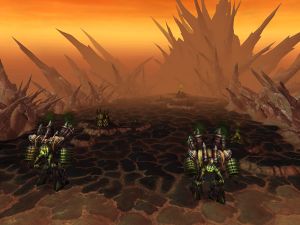 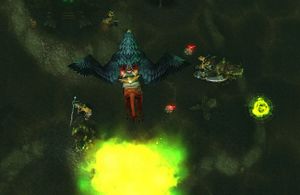 Forge Camp: Wrath is the last of the three Burning Legion Forge Camps in the Blade's Edge Mountains of Outland, located northwest of Bladespire Hold and north of Ogri'la. It is only accessible by flight.

Forge Camp Wrath and Terror are equipped with several emplacements of fel flak cannons to shoot down any Sha'tari Skyguard fliers or other enemies — such as, perhaps, the black dragonflight — that might attack from the air. The Skyguard calls upon pilots to bomb the cannons' ammunition, while avoiding the flak fire from the still-operating cannons. The cannon fire will immediately cause a flier to dismount, resulting in possible landing in the middle of a pack of demons or — worse — falling to their death from high altitude.