For the artifact forge, see Forge of Odyn (object). For the quest, see 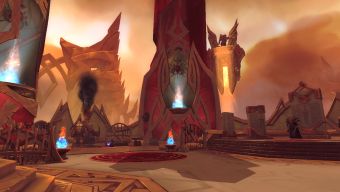 The Forge of Odyn is a wing of Skyhold that contains Odyn's legendary forge. Also found here are a number of stone tablets detailing the saga of Odyn and the Valarjar, as well as several display plinths for artifacts. The forge itself is managed by Master Smith Helgar, and has been operating for longer than many races have existed.[1]

The Forge of Odyn can be used by chosen warriors to upgrade and customize artifact weapons, namely the Scale of the Earth-Warder, the Warswords of the Valarjar, and Strom'kar, the Warbreaker, which all played a major role fighting the third invasion of the Burning Legion. These weapons can be increased in power or altered in appearance, based on achievements obtained by the warrior and Artifact Power accumulated.

Several large stone tablets can be found in the forge area, all of which detail various sagas and legends surrounding the Valarjar and their master, Odyn. These include The Legend of Odyn, the Saga of the Valarjar, and The Favored of Odyn. The stories can be collected and expanded by obtaining the Lost Legends scattered throughout the world.[2]

Einar the Runecaster can help improve various class hall actions and resources, from increasing success chances in missions to aiding warriors in the open world.