[The Forge of Souls]. 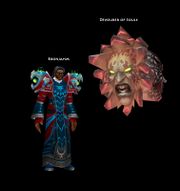 The Forge of Souls bosses

is the first wing of the Frozen Halls instances in Icecrown Citadel, released in patch 3.3. The Forge is a massive production facility that contains soul grinders, the latest foul construct in the Lich King's arsenal.

Queuing for the Forge of Souls in the Dungeon Finder requires level 80 and that one's gear have an average item level of 180.

Serving as the first wing in this expansive dungeon, the Forge of Souls will quickly put players to the test of carving through the Scourge stronghold into deeper, more treacherous locations. Jaina will command Alliance forces, and Sylvanas will direct Horde forces. The goal is to ruin the twisted engines known as soul grinders found in this portion of the citadel, and then players can advance — that is, if the Horde and Alliance forces can overcome the foes who confront them.

Bronjahm, the Godfather of Souls
An instrument of reckoning, Bronjahm watches over the engines in the Forge of Souls. He must be killed if the soul grinders are to be destroyed.

The Devourer of Souls
As the chief operator of the engines found in this wing, the Devourer stands guard over the souls stolen by the Lich King.

The name for this instance might be inspired by the Forge of Souls of the Warhammer 40.000 universe: a workshop which crafts the unholy weapons of Daemons. Among its creations are the Soul Grinders, terrible machines fused with daemons.

[Battered Hilt] or gold (about half will drop in excess of one gold). Both bosses are skippable by hugging the outer edges of their respective rooms, though some classes should be able to solo them. This allows for continuous access into the Pit of Saron at the end of the instance to continue farming without having to run back to the start.