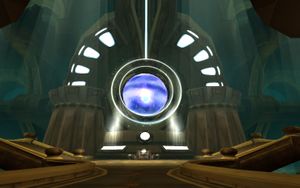 The Forge of Wills 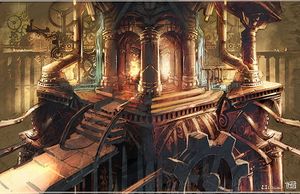 The Forge of Wills is a large forge watched over by Sjonnir the Ironshaper within Halls of Stone. It can only be entered after the Tribunal of Ages event has been completed. It is surrounded by dormant iron vrykul. After the fight with Sjonnir, Brann Bronzebeard speculates that another location is making more of them[1] (either the Iron Crucible or the Colossal Forge).

The Forge was also able to draw on the life essence of Azeroth and create sentient life. It was here that the various titan-forged were born, such as the stone troggs, earthen, mechagnomes, and the vrykul.[3]

After the Old Gods had been defeated, Prime Designate Odyn ordered the Forge of Wills' construction. Built within Ulduar by Watchers Mimiron and Archaedas, it was intended to be used in helping shape the world, drawing on the energies of the cosmos to mature the Azeroth world-soul's sentience. The Forge of Wills was also used to create the various titan-forged which would help the keepers to shape the world. However, the first design was too complex, resulting in the creation of malformed creatures such as the stone troggs. The watchers corrected their design and the next generation of titan-forged was the earthen.[2][3]

The Curse of Flesh

While Yogg-Saron was imprisoned within Ulduar, he devised a plan to escape the watchers. He corrupted the Forge of Wills' matrix with the Curse of Flesh. The Curse would infect new titan-forged, slowly turn their rock-like forms into ones of flesh and blood. The Curse would even spread from the newer generations to the older ones, making the titan-forged much easier to kill when the time came. Those infected became the ancestors of the modern troggs, dwarves, gnomes, and humans.[5]

After Loken killed Thorim's mate Sif, Loken blamed her death on Arngrim, King of the frost giants. Thorim sent his storm giants to attack the ice giants, resulting in many wars between them. To guard Ulduar from the warring giants, Loken used the Forge of Wills to create a massive army of earthen. However, Yogg-Saron had manifested as the spirit of Sif to trick Loken into creating earthen with the Curse of Flesh. Loken deactivated the Forge after he realized it was cursed.[5]

For thousands of years the imprisoned Yogg-Saron was unable to do more than keeping the Keepers, Loken included, quiet and complacent inside Ulduar. His grasp on them was tenuous, and convincing them to directly help the Old God had proven fruitless in the past. It was not until Cho'gall of the Old God-worshiping Twilight's Hammer clan infiltrated Ulduar and weakened Yogg-Saron's chains that the entity's influence on the Keepers increased, becoming strong as iron. Yogg-Saron commanded Loken to create a new army from the Forge of Wills. In Lokens's hands, the forge churned out legions of iron dwarves and vrykul who sought only bloodshed and war.[6]

Anyone familiar with Star Wars: Knights of the Old Republic will instantly notice a resemblance between the Forge of Wills and the Star Forge. Both are ancient factories that enemy factions use to manufacture large amounts of troops, and both forges work much the same way (by generating troops as Brann does when he summons troggs and oozes). They also resemble one another in terms of architecture. The main part of the forge bears a striking resemblance to the holo-deck where the second to last fight in the game takes place. It is possible, then, that the idea for the Forge of Wills rests in the Star Forge.