Forged in Fire an' Flame

Speak with Moira at the Stormwind Embassy to travel to Blackrock Depths and repair the Black Anvil.

Ye've done more than I had any right tae ask, <name>. Recovered Ironfoe from our enemy, retrieved a fragment o' the Molten Core, an' exposed the enemy within our ranks at the Firelands.

If ye'd do me the honor, would ye come with us tae Blackrock Depths one last time while we repair our most sacred anvil?

Ye've been a lifesaver, <name>. 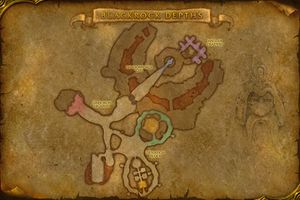 (Quest) I am ready to go to Blackrock Depths.

The player is deposited (once again) in the Hall of Crafting outside the Black Anvil chamber. Inside, Moira, Thaelin Darkanvil, and Anvil-Thane Thurgaden and his Dark Iron Earthbreakers work on repairing the anvil. As Thaelin's hammer strikes it, bursts of Azerite shoot up into the air.

Moira Thaurissan says: The final stroke is yours, <name>.
Moira Thaurissan says: We decided tae make a few upgrades while repairin' the Black Anvil.
Thaelin Darkanvil says: It's a good day tae be Dark Iron!
Anvil-Thane Thurgaden says: Aye. I was dubious about this whole arrangement, but it seems things have worked out fer the better.

Click on the Black Anvil to repair it. Once that's done, a mole machine rises up from behind the group.

Moira Thaurissan says: We've done it! Let us return to Stormwind and report in to the King.

Before using the mole machine to return to the Embassy, turn the quest in to Moira.