For other crypts, see Crypt (disambiguation). 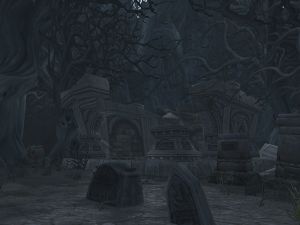 The Forgotten Crypt lies behind the tower of Karazhan, in the cemetery at Morgan's Plot.

The purpose of the crypt was originally unknown - it may have been intended to be a playground for developers, a testing site of sorts, an unfinished instance, or something else entirely. In vanilla World of Warcraft, the area used to be accessed via dying close to the gate and running through it, but this was changed in patch 2.0.1.

In patch 7.0.3, the Well of the Forgotten was made available, and in patch 7.3.0, the entire crypt was opened for all who solved an extremely difficult puzzle.

Many players suspect that the crypt was originally never fully implemented because of the mildly disturbing content, mainly the now infamous room of upside-down sinners, would've made World of Warcraft's ESRB rating become M for Mature. On January 24th, 2014, Blizzard community manager Bashiok responded to a post inquiring to the reasons the crypt was never used and provided some insights on Blizzard's design processes back during the days of its creation, stating the reason it was abandoned was more than likely that Blizzard simply changed their minds about using it.

Oh yeah, I remember that! Haven't seen a screenshot in quite a while. Not sure I know the story on it but knowing our development processes back then there tended to be a lot more stuff made that we just didn't use. I can't imagine the game rating rumor is accurate, because if it was content we wanted to use we'd just take out the upside-down sinners or whatever the issue was and use it for whatever it was we wanted to do with that space. It's not like they're permanent fixtures. Fun rumor though! :) More likely we just changed our minds.