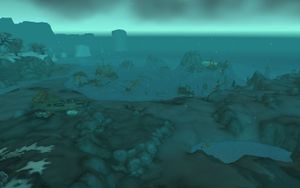 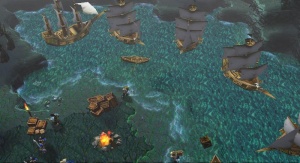 The Forgotten Shore in Warcraft III.

The Forgotten Shore is located on the Dragonblight's southeastern portion, between New Hearthglen and the Dragonspine Tributary. It was the site of the main encampment of Arthas Menethil's forces when he set out to Northrend to destroy Mal'Ganis. After finding Muradin Bronzebeard and his men and establishing a smaller base camp, Arthas went to rescue the rest of Muradin's men from the undead. A nearby second undead base was razed by Arthas' men, and they were ordered to build a new base on top of it. Later, a messenger from Lordaeron came and told them that they were to pack up and leave. Captain Luc Valonforth ordered the troops to cut through the forest. Arthas later returned after knowing that they were ordered to come back to Lordaeron. The prince, however, was determined to stay in Northrend until Mal'Ganis was destroyed. He, Muradin, and two mortar teams recruited a number of mercenaries and destroyed the ships. Arthas then blamed the mercenaries, saying that they had burnt them (though it was a half-true).[1] The prince's forces later moved up to Drak'Tharon Keep.

During the war against the Lich King some years later, the shore was populated by Forgotten Captains, Knights, Footmen, Riflemen and Peasants. Orik Trueheart, being himself a former member of the 1st Legion, sent adventurers to free the ghosts.

The exact location of the Forgotten Shore, which was first mentioned in World of Warcraft, seems to have undergone a retcon from Warcraft III to Wrath of the Lich King. In Warcraft III the shore was located on the border of Daggercap Bay, which lies in the Howling Fjord. In World of Warcraft however, it was moved to the southeastern Dragonblight.

The World of Warcraft RPG mentioned that Valgarde was the first true settlement built by Arthas's people after the ships were burnt, which would match with Baelgun's Excavation Site being situated in the Howling Fjord too. However, Valgarde was changed as being built by the forces of the Valiance Expedition instead.