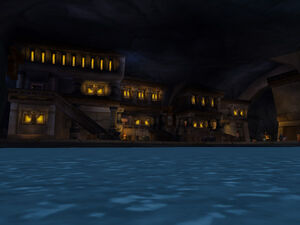 The Forlorn Cavern is a long, winding road built around Ironforge's underground lake. Its naturally dark and secluded nature makes it perfect for lots of shady deals. Rogue and warlock trainers can be found here (the latter inside the Bonegrip's Runes and Dooms), as well as vendors catering to those classes. The Cavern also holds two shops, the Stoneblade's and the Traveling Fisherman.

To get to the Forlorn Cavern, you can head east from the Mystic Ward or west from the Hall of Explorers.

The following NPCs are located in the Forlorn Cavern