Forlorn Ridge is a mountain that was once located in southwestern Azshara. When the Bilgewater goblins settled the region, they moved the entire mountain north.[1][2] 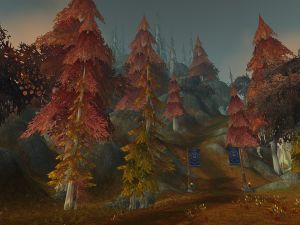 Forlorn Ridge before being moved.

Forlorn Ridge completely dominated the nearby landscape of western Azshara, and both the Alliance and the Horde built fortifications on the side of the mountain.

After the Cataclysm, the recently settled in Azshara goblins of the Bilgewater Cartel moved the entire mountain at a nearby area to the north and turned its former location into a strip mine and quarry named Mountainfoot Strip Mine. This caused the underground basilisks living there to attack the miners.[1][3]

The goblins would later build Jastor Gallywix's Pleasure Palace on its summit.

Due to its shape, the mountain could have been a long-dead volcano.