Fortresses were the military and economic center of the largest orcish and Horde cities during their wars against humans and the Alliance. This has changed, for they are now rare and the modern Horde seems to favor large towers or barracks as hub for their towns.

While not strictly described as a fortress, the upper reaches of Blackrock Spire were taken over by the Blackrock clan during the First War and were used as the military headquarters of the orcs during that time.[2] Also, in Warcraft II Blackrock Spire was represented by a generic orc fortress building, their volcanic design having been inspired by the great spire itself.

As the military and economic center of the largest orc cities, the fortress could hold and process all the gold and lumber that the peons could be made to harvest. Protected by obsidian spires shaped from the earth itself, the fortress was all but impervious to the attacks of the feeble human forces. Constructed by orcish leaders attaining arrant mastery both on and off the field of battle, the fortress served as a proclamation to the Alliance of the inevitable triumph of the Orcish Horde.[3]

As said above, Blackrock Spire was represented in-game by a generic orc fortress building. Other named fortresses included Fortress Auchindoun and Fortress Shadowmoon (even though the latter got retconned).

The fortress is the upgraded version of a stronghold.[4] Once orc technology reaches its height, construction of the fortress may begin. Far more formidable than even the stronghold, the fortress provides a siege-resistant command base. With the addition of spiked barricades, a fortress may daunt even the most hostile foe.[5]

Special Orgrimmar Fortresses were built during the Invasion of Durotar. 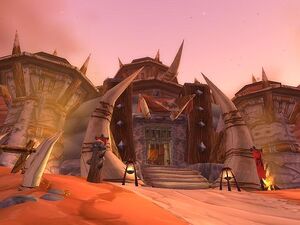 As said above, fortresses are now rare and the modern Horde seems to favor large towers or barracks as hub for their towns. Fortress can also refer to both the building and the community within its walls, and as such many races besides the orcs are known to build fortified areas and call them fortresses.

There is no generic orc fortress building design in World of Warcraft, though the original Grommash Hold seems to be a larger version of WoW's stronghold design. Several unique orc forts are only speculated to be fortresses but each of them do have a unique model. Several named fortress areas are also simply a stronghold with fortified walls, such as in Kil'sorrow Fortress or Thunder Axe Fortress.

A fully-upgraded Frostwall garrison is considered to be a fortress.[6] This matches with the above description of orc fortresses possibly being strongholds with fortified walls and several support buildings. 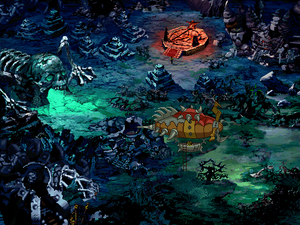 In Warcraft Adventures, the ruins of a fortress could be seen in the abandoned Grim Batol. Additionally, the great fortress of Blackrock Spire could be partially visited.