Fortress Shadowmoon on the map. 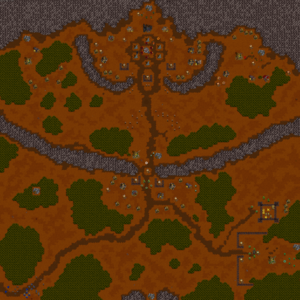 Fortress Shadowmoon as the black base during the Invasion of Draenor.

Fortress Shadowmoon was the fortress of the Shadowmoon clan and the seat of power of the shaman Ner'zhul during the Invasion of Draenor. The fortress was also home to a mystic sanctum where a dark order of death knights dwelt. Its towering spires reached upwards as obsidian blades to cleave the hostile amber skies above.[1]

The Alliance Expedition attacked Shadowmoon Valley in order to destroy the fortress of the Shadowmoon clan as well as get the Book of Medivh that was there.[2]

The Fortress itself was besieged by the Alliance and Teron Gorefiend died there. Khadgar hoped that with the Book of Medivh he would be able to close the Dark Portal between Azeroth and Draenor.[1]

Although the fortress was destroyed and the death knights were scattered, neither the shaman nor the Book of Medivh were found. Khadgar and Turalyon used their magic to search the ruins for some clue as to the location of the mystic tome, but could not find any.[3] In truth, members of the Laughing Skull clan had seized the book from Ner'zhul's stronghold before the Alliance armies could destroy it. The orcs later used it as a bargaining tool in order to convince the Alliance to help them destroy a stronghold of the Thunderlord clan in the Blade's Edge Mountains.[4] 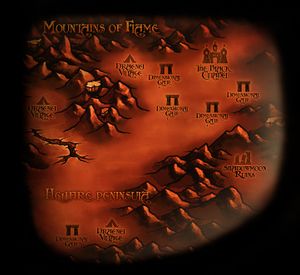 Map with the Shadowmoon Ruins.

Both the Black Temple dungeon trailer and the novel Rise of the Horde claim that the Temple of Karabor, the sanctum of the draenei leader Velen, was captured by orcs for a time before it became the sinister fortress of Magtheridon, and was in fact used as the headquarters of the Shadow Council until they departed for Azeroth. Afterwards, the temple appears to have been used as the home base for the Shadowmoon clan under Ner'zhul.

This suggests that the Fortress Shadowmoon assaulted in Beyond the Dark Portal was in fact another name for this structure.

Anguish Fortress is, like Fortress Shadowmoon, a stronghold of the Shadowmoon clan located in their home region of Shadowmoon Valley. It is not as far east as the Shadowmoon Fortress depicted on the Beyond the Dark Portal map, but much of Draenor's geography has been retconned in the years since that map's creation.