For other uses, see Lucky. 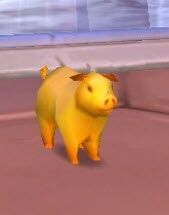 The Fortune Coin teaches you how to summon Lucky, a golden pig companion.

This item was available to participants of the Blizzard Worldwide Invitational 2007, who were given a code that unlocks this pet in-game. The item can be acquired from the following NPCs by redeeming the WWI promotion codes:

Lucky squeals when he's angry or when he's eating. Either way, you don't want to bother him.