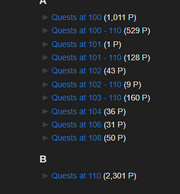 After dealing with the Broken Isles quests' scaling levels and the tech going to the rest of the world soon, I'm not sure if how we've been handing them if worth doing in the future.

This is just going to be all over the place. So I suggest we either have categories created based off the required level, instead of quest level, or remove the categories for quest levels altogether since they won't mean much anyway. Thoughts?

I'd say start a vote for this since this is pretty much that. I'd go with removing the system entirely because I don't see how us as editors would need them for future things or for regular day users; quests are mostly needed to be found by their zone instead of level. — Surafbrov T / P / C 04:59, 24 November 2017 (UTC)

Never used these categories myself, and probably never will. That said I'm not sure about removing the system entirely ... Xporc (talk) 08:13, 24 November 2017 (UTC)