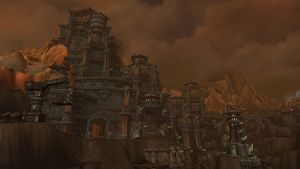 The Blackrock Foundry in Gorgrond.

Foundries are large, industrialized forges. During the Second War they were positioned on coasts to easier supplement shipyards. Only a few races like the dwarves, orcs and goblins have the industrial might to build such massive facilities.

The introduction of foundries made the construction of the mighty vessels known as transports and battleships possible. Obsessed with creating the strongest force in the Alliance, these skilled artisans needed only ample resources to design better armor and weaponry for the fleet. Located on the coast to easier supplement Alliance shipyards, they were an integral part of warship maintenance. Constantly filled with heavy clouds of soot and ash, the intense heat that radiated from the huge smelting pools caused some to jest that they may have been in an orcish building instead of a human one.[1]

Known by the trio of towering smokestacks that surrounded this structure, the foundry was instrumental in creating the massive armor plates and lethal cannons that were found on the greatest of the orc warships - the juggernaught. Abysmally dark and sweltering with unnatural heat, foundries were filled with an acrid layer of smoke and soot - making most orcs feel right at home when visiting one. Heat emanated from all openings as foundry workers poured molten slag into casts for new cannons, while pounding resounded for miles along the coast as they shaped ore into new armor.[2]

No foundries are still existing by the coasts of Azeroth, but the one in the Deadmines is the closest to their previous incarnation, intended to help create the mighty juggernaught wanted by the Defias Brotherhood.