“The most powerful death knights within Naxxramas are the four horsemen. They represent the pinnacle of Kel'Thuzad's guard. The first, Thane Korth'azz, holds the power of flame. The next, Lady Blaumeux, calls forth the power of shadows, drawing the souls of the living into the voracious embrace. Sir Zeliek, a paladin in life, so strong in his faith, that even in undeath, the power of the light still heeds his call, smiting his foes in battle. The final death knight, Lord Mograine, was the finest warrior that the death knights had ever seen. However, after the events of Azeroth, he vanished without a trace. Kel'Thuzad has appointed Baron Rivendare in his place.”

The Four Horsemen are extremely powerful elite death knights originally created by the lich Kel'Thuzad to serve as his royal guard.[1] The most feared and powerful soldiers of all the Scourge, the Archlich considered them his greatest creation. They are damned souls, shackled in anguish for eternity.

During the third invasion of the Burning Legion, the Lich King decided to send his champion to create the new Four Horsemen under the command of Darion Mograine as voluntarily agents if the Scourge remains contained in Northrend.

Near Stratholme, the wielder of the Ashbringer, Alexandros Mograine, fell during a trap, murdered by his oldest son, Renault. His body was then taken by the Scourge to Naxxramas where his will would be broken and his spirit corrupted by Kel'Thuzad. He rose as the leader of the Four Horsemen.[3] 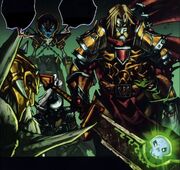 Alexandros stands among the Four Horsemen and Kel'Thuzad.

The Four Horsemen stood in Naxxramas above Stratholme and oversaw the Military Quarter. They fought the champions of the Alliance and Horde and the Argent Dawn assaulting the necropolis.[4]

Darion Mograine also led a small party into Naxxramas in order to find his father. Following the whisperings of Alexandros, Castillian teleported Darion's group in a trap where the Four Horsemen were waiting. Brannigan Thundermaul dismounted Zeliek and fought Korth'azz. While Alexandros battled his son Darion, Lady Blaumeux was defeated by Grunn'Holde, before being executed by Alexandros himself. Zeliek stroke at Brannigan's back, effectively killing him. Taking advantage of Castilian's spell, Darion cleft Korth'azz in two and killed his father with the Ashbringer, which would thereafter hold the soul of Alexandros.[5]

Despite the first failure of Naxxramas, the necropolis rose once more, in the skies of Dragonblight in Northrend. Kel'Thuzad had returned along with his Horsemen. Alexandros Mograine, the greatest champion of the Scourge, was replaced with Baron Rivendare as the new leader of the Horsemen. During the assault of the necropolis, they all fell under the attack of adventurers.[6]

After the return of the Burning Legion, the Lich King chose a new champion to lead the Knights of the Ebon Blade, the Deathlord. The Deathlord found one of the three powerful, legendary artifact weapons suggested to him, after which he was ordered by Bolvar to create a new set of Four Horsemen.

The first Horseman is Nazgrim. Buried near the front of Orgrimmar, the Deathlord and Thassarian resurrect him.[7] The second Horseman is Thoras Trollbane. In order to access his body, the Ebon Blade had to deal with Prince Galen.[8] However, despite previous agreements,[9] he refuses to let his father come back to life. The Deathlord executes him and takes Trol'kalar.[10] Finally, he resurrects Thoras and gives him back his sword.[11] The third Horseman is the former High Inquisitor of the Scarlet Crusade, Sally Whitemane.[12] The Deathlord, Thassarian, and the Horsemen assault the Scarlet Monastery, killing the last crusaders[13] and reanimate some corpses.[14] Finally, Sally Whitemane is resurrected by the Deathlord.

In order to resurrect Tirion Fordring as the final horseman, the Knights of the Ebon Blade mount an assault on Light's Hope Chapel. However, the Light on the sacred ground proves too strong and they are defeated. During the assault, Darion Mograine is killed. With his corpse returned to Acherus: The Ebon Hold, the Lich King commends Darion's sacrifice and orders the Deathlord to raise him as the final horseman. The resurrected Darion follows in his father's footsteps as the next leader of the Four Horsemen.[15]

The Four Horsemen confronting Maxwell Tyrosus and the Highlord.

Maxwell Tyrosus together with the Highlord of the Silver Hand arrived to Acherus demanding an audience with the Four Horsemen. Darion angrily reminded the new wielder of his father's blade that they were not the only Highlord present before asking their reasoning for entering Acherus. Whitemane on the other hand wasn't interested about the reason for the paladins' arrival and asked the guards to escort them out before being interrupted by Nazgrim who, seeing the two paladins as honorable people, suggested that they let them explain themselves to which Trollbane agreed, saying that they could decide what to do with them after hearing them.

The Highlord of the Silver Hand then showed them the

[Shard of Darkness] which Darion thought only to be a myth. Darion, realizing the paladins' intentions was reluctant to help them until Maxwell reminded him and the other Horsemen that the death knights were indebted to the Order of the Silver Hand for attacking Light's Hope in an attempt to raise Tirion as one of theirs. The Horsemen agreed and Darion proclaimed that the Ashbringer would know their power once again.

The Horsemen then focused and channeled their power into the shard, turning it into the

[Heart of Corruption]. Darion told the Highlord that they were even now to which Maxwell responded by thanking Darion, and told the death knight that his father would be proud of him for agreeing to help them. Darion angrily asks Maxwell not to mention his father in his presence again before demanding the two paladins to leave Acherus and never return.

The Four Horsemen, with the Deathlord and Minerva Ravensorrow mounted on Daumyr, battled demons on the Broken Shore.[16]

Throughout the Fourth War, The Horsemen acquired fallen champions of both the Horde and Alliance under the orders of the Lich King, and following its completion witnessed the new generation of death knights being raised.[17]

As the pandaren and allied races can become death knights, the Four Horsemen appear at the Frozen Throne. Darion Mograine sends the new death knights to travel to Orgrimmar if the death knight is Horde or Stormwind if it is Alliance and make a choice from the Hero's Call Board.[18]

Believing that Bolvar had fallen to the powers of the Lich King, Darion Mograine attempted to kill him. However, Bolvar forcibly controlled the former's body and made him return to Acherus: The Ebon Hold, while taunting him about requiring his fellow horsemen. Though wary of it being a trap, the horsemen agreed to kill the Lich King, and decide who would wield the Helm of Domination after Bolvar was slain.

However, en route to Icecrown Citadel, the Four Horsemen, using their connection to the Lich King, discovered him locked in combat with Sylvanas Windrunner, and learned that this was all part of Bolvar's gambit to have the horsemen arrive and kill the winner of the conflict.

The Horsemen were stunned when Sylvanas won and destroyed the helm instead of claiming ownership of it. With the Scourge no longer under control, Darion ordered Nazgrim and Sally Whitemane to rescue Bolvar, while he and Thoras Trollbane fought to keep Acherus under their control.[17]

The new Horsemen of the Ebon Blade

The original Horsemen of the Scourge