For the encounter in Ulduar, see Freya (tactics).

Freya is one of the titanic Keepers. She resided in the Temple of Life in the Storm Peaks until Keeper Loken rebelled against the titan-forged. Yogg-Saron took control of her and made her lay dormant inside the greenery of Ulduar.[1] Freya left behind an avatar in Sholazar Basin to protect it as a fail-safe if she were to be unavailable to the land.

Freya was one of the Keepers created by the Pantheon to lead the titan-forged armies against the forces of the Old Gods. She was imbued with power by Eonar. Together with Archaedas, she battled and defeated Therazane the Stonemother.[2]

Freya is the creator of the Emerald Dream, which functions as a "blueprint" of Azeroth. Some believe that Freya wove the Emerald Dream into being from nothing. Others claim that this strange place had always existed in some form, a dream born from Azeroth’s slumbering world-soul. It is said that Freya tapped into this realm and molded what would become known as the Emerald Dream as a way to commune with the nascent titan.[2] She began creating the Emerald Dream with G'Hanir, a single massive tree set atop a high peak. From it bloomed many fruits and flowers, and new life flowed outwards in waves, sweeping across the land. Freya sculpted many pools of life in other locations within the Dream, but G'Hanir was the first, the tallest, and the most radiant. For millennia, it served as a source of healing and balance that extended beyond the Dream and into the physical world.[3]

Freya also created Un'Goro Crater, Sholazar Basin, and the Vale of Eternal Blossoms.[2] She also planted a great tree in the Vale of Eternal Blossoms known as Fu Zan, from which all of Pandaria's forests would one day descend. Freya fashioned a walking stick from the branches of Fu Zan, which she used on her travels.[4] Freya created new life within her enclaves, and in time the Wild Gods emerged. Seeing the Wild Gods as her children, Freya linked them to the Emerald Dream and wandered primordial Kalimdor with them at her side. The area they spent the most time at was Mount Hyjal.[2]

After the defeat of Galakrond in Northrend, Freya and some other Keepers channeled the powers of the titans into five proto-dragons. Freya bestowed the powers of Eonar upon Alexstrasza and Ysera.[5]

Once, while traveling Azeroth in search of exceptional animals, Freya discovered a panther cub under attack by a pack of wolves, her mother already slain. To Freya's surprise, though the wolves had wounded the tiny creature, she continued to fight, swiping viciously with her claws against the larger predators. Before long the wolves were driven away, unwilling to suffer further injuries for their meal. Freya picked up the cub only to be greeted by a flurry of scratches, but she was not angered; on the contrary, Freya was delighted by the panther's unrelenting wildness. Freya healed the panther cub's injuries and named her Ashamane, after her striking black fur.[3]

Freya also came across two young inquisitive bears named Ursoc and Ursol in the Grizzly Hills. She recognized their potential and saw what they would become.[3] Freya gifted the Claws of Ursoc, forged from titansteel, to Ursoc. He wielded the claws in countless battles until his death during the War of the Ancients.[3]

Four other Wild Gods showed a particular commitment to peace and wisdom. These Wild Gods - Yu'lon, Niuzao, Xuen, and Chi-Ji - would one day come to be known as the August Celestials by the natives of Pandaria, and Freya knew they would aid the region well. So it was that when, countless years later, Loken became corrupted by Yogg-Saron, Freya gave the staff she had fashioned from Fu Zan to the August Celestials for safekeeping. She told them that, "If I do not see you again, return this staff to Azeroth, to one of its children. Give it to someone who loathes battle and loves peace."[4] Freya never returned for her staff, having been defeated by Loken and enslaved by Yogg-Saron.[2] 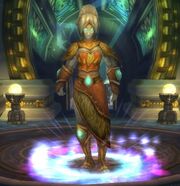 Freya appears in World of Warcraft as an encounter in Ulduar. Once defeated, she is freed of Yogg-Saron's control and can assist players during the Yogg-Saron encounter. During the battle against the Old God, Freya increases the potency of the heroes' healing and provides sanity-restorating wells.