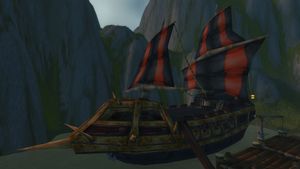 The Harbinger, a pirate frigate.

Frigates are intermediary warships, very similar to destroyers, to the point that in The Frozen Throne the filename for the frigates' icons denoted them as destroyers. It is unknown why the name was changed.

During the The Frozen Throne campaigns several shipyards sold boats according to the buyer's faction, including frigates.

Frigates already existed in World of Warcraft vanilla, both as wrecks and pirate ships, but it was not until Wrath of the Lich King that they were formally identified as a class of warships. Their bow is different from normal transport ships, notably having several gun ports.

Frigates are known to be owned by the Scarlet Crusade,[1] the Blackwater Raiders, the Bloodsail Buccaneers, the Southsea Freebooters, the Northsea Freebooters and Schnottz's crew. Harpoon Master Yavus is also said to have attacked Alliance frigates in Daggercap Bay.[2] No non-pirate frigates have been seen intact, though the human battleship is essentially a modified frigate.