For the critter and battle pet, see Frog (critter). 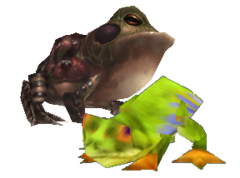 Frogs are a common amphibian species found in Azeroth, Outland and Bonich.

Some species of frog can feast upon prey several times larger than themselves by slowly digesting the victim externally with a toxic slime.[1]

Ale frogs were thought to have been extinct until the strange brews at the Darkmoon Faire brought them out of hiding.[2] The rumors of the medicinal uses of the biletoad were believed to have been started by a particularly mischievous apothecary.[3]

Orcish children have a tradition where they sneak up on a mud jumper and whisper a secret they wish to come true. If the mud jumper doesn't jump, the wish will come true.[4]

The Frog in WCIII.

This change will only apply to new frogs/toads added from 5.2.0 and on.