There is only one kind of cold the dwarves of Dun Morogh fear.[1] 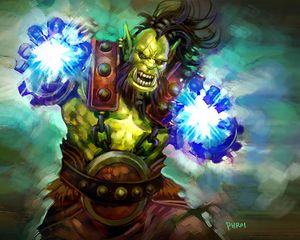 In addition to its significant direct damage (which is instant cast and does not reset the shaman's melee attack), Frost Shock also snares the target. In PvE, it's useful against runners, slowing their retreat if the shock doesn't kill them outright. It can also be used for kiting high level mobs in certain dungeon situations. Against ranged opponents (in PvP, casters and hunters), the shaman can use this power to stay up close to use melee. Against melee classes like warriors and rogues, shamans use this ability to maintain their distance.

With a ridiculous combination of high-damage, an instant cast, an eight-second effect, and a six-second cooldown, it would be foolish not to constantly Frost Shock other players or mobs until a win occurs. Once they are within melee range, drop an

[Earthbind Totem] against melee mobs/players (or grounding for casters) and hack away for an easy win.