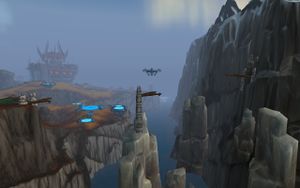 Possibly the Frostbridge in Wrath of the Lich King. 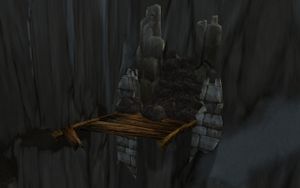 The collapsed tunnel at the end of the bridge that goes into Coldarra.

The Frostbridge, named by the tuskarr, spans the Westrift to connect the island of Coldarra to the Borean Tundra and the rest of Northrend. It is narrow, but more than one hundred feet across, and arcs slightly. The top is rough to provide purchases, and has a small lip along the edges, enough to keep travelers from walking unknowing off the bridge but not enough to stop someone from being pushed. Blue dragons watch the bridge at all times and stop travelers from crossing without declaring their names and intentions.

The nearby tuskarr that named the bridge have a tale as to why the dragons built it. It says at some point a few centuries back, a human came to Coldarra to see Malygos. This man was a scholar and wished to exchange ideas. The great dragon chose to see him, and had the man flown to the Nexus. For months they communed and formed a great friendship, but then the man returned to the world and his duties. He came back several times, however, and finally Malygos ordered a bridge fashioned across the Westrift so his friend could approach unaided.[1]

Frostbridge itself is not a subzone, but what may be its ruins can be seen near Amber Ledge. If so, the blue dragonflight, or someone else, presumably destroyed it.