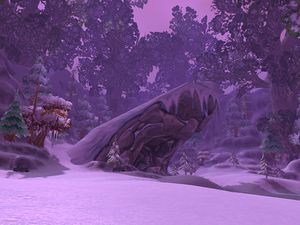 Frostsaber Rock is a large jutting tor in the northern part of Winterspring.

At the very apex of Frostsaber Rock stands Rivern Frostwind of the Wintersaber Trainers. He offers friends of the Alliance to work for him, and in exchange he will teach them how to tame and ride one of the beautiful beasts.

The upper reaches of Winterspring are home to the roaming frostsaber cats, revered by the night elves. Frostsaber Rock itself is a small cave; the inside is not used by the cats, but rather by hopeful trainers. The frostsabers roam near the top of the rock, and trainers encamp there while attempting to convince the mighty beasts to serve as their companions.

It is said that if a wandering night elf warrior is fortunate enough to gaze upon Shy'Rotam, the greatest of all frostsabers, that warrior will be blessed for the rest of his days.[1]

This site is home to a great pride of sabertooth cats, ruled by the gargantuan female named Shy'Rotam.[2]